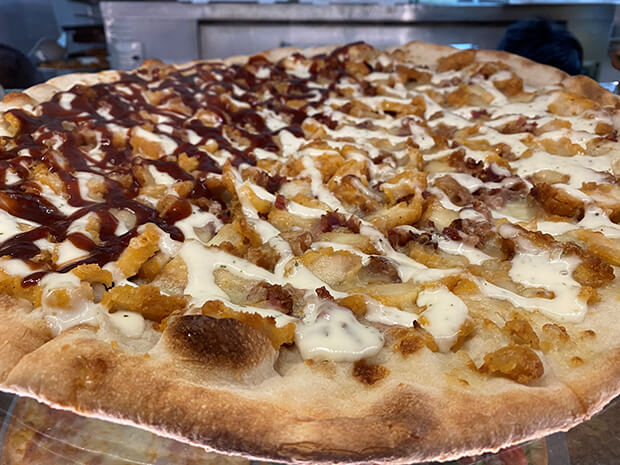 A Dream That Gave Shape to Vinny’s

Some of Chef Vinny Savinelli’s earliest memories are of the kitchen: watching, helping, and learning as his father, Domenico, an internationally trained chef, regularly worked his culinary magic. You can say that great food is in Vinny’s blood!

“Many of my fondest childhood memories were of being in the restaurant with my parents,” said Vinny, who, with his wife, Theresa, owns Vinny’s Pizza & Pasta at 28 Eastman Street in Cranford, N.J. “I grew up in the business and always dreamed of having my own place.”

That dream eventually became a reality after Vinny graduated with a degree in business from Seton Hall University and tried his hand in the business world. The experience served to strengthen Vinny’s belief that the restaurant industry is where he belonged.

“I worked outside the restaurant field for two years and quickly decided that it wasn’t for me,” he said. “I knew I wanted to get back into the kitchen.”

Returning to his dream of owning his own restaurant, Vinny opened Il Giardino in Cranford in 1992. The restaurant quickly thrived and became an asset to the community.

“I love being in Cranford, I met my wife Theresa in the restaurant in Cranford, and I am raising my two children, Nicoletta and Dominic, in the community,” he said.

In 2002, he sold his restaurant. He and his wife then built a restaurant in Martinsville, N.J.

“Even though business was great and the people of Martinsville were nice, it was nothing like the feeling I had in Cranford,” he said. After ten successful years of running a restaurant in Martinsville, Vinny and Theresa decided it was time to come back home to Cranford. They sold the restaurant and Opened Vinny’s Pizza & Pasta in November 2012.

For the Love of Italian Food 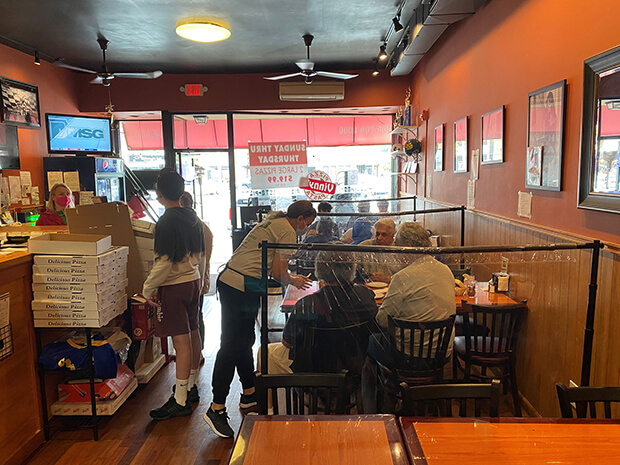 Vinny’s Pizza & Pasta is an Italian food lover’s delight. The menu consists of traditional Italian cuisine and pizza made by Vinny with the unique recipe adaptations that have made him an admired New Jersey chef for years. He uses the freshest ingredients and provides incredible value and a comfortable, inviting atmosphere for his guests. BYOB is welcome here.

“I want Vinny’s Pizza & Pasta to be a destination in the community that provides my home-style Italian cooking, where all my neighbors can come, be fed, and enjoy life,” he said.

The dining room is adorned with Cranford sports memorabilia and photos of Italian and Italian American legends. It’s a comfortable place. And Vinny wants to meet you. Vinny wants to talk to you.

“In between cooking and making pizza, I’m walking around talking to people,” Vinny said. “Doing that is a special perk of the job.”

Vinny also does Italian catering for any event, large or small.

“I must have catered more than a thousand events in town from Christenings and Communions to showers,” he said. “It’s a great feeling knowing that people are willing to put such an important event in my hands; I never disappoint.”

A family affair, Vinny is helped by his wife, Theresa, and his mother, Giovanna, who welcomes all and runs the front of the house.

“I learned from the best – my father,” Vinny said proudly with his huge, broad, and welcoming smile.
Come in and join Vinny and Theresa for a memorable dining and truly family experience.

“Vinny catered my boyfriend’s surprise 50th birthday party. I never threw a party in my life so I left it in Vinny’s hands on what to order and how much. Everyone raved about the food! I thought I would have a ton left but all I went home with was the famous ‘Vinny’s rolls’ and I was OK with it LOL. Thank you so much for helping Vinny!”

“Can’t go wrong with anything on the menu. Always delicious and fresh!! Highly recommend Vinny’s Pizza!!”

“My family and I LOVE Vinny’s. They make a great plate of Italian food. We have never been disappointed with their cuisine and very friendly and courteous wait staff. We feel like family every time we come in. From pizza to an amazing bowl of homemade Bolognese, this restaurant hits all the marks.”

“We used Vinny’s to cater my daughter’s graduation party. Food was delicious, delivered on time and a hit with everyone. The rolls are delicious, and all of the guests (including several very talented Italian cooks!) RAVED about the eggplant parm. Thanks, Vinny’s, for helping make our day a success!”

“Simple good no nonsense pizza! Had a Vinny’s Special and it tasted fresh and delicious! The Sicillian was light and airy.”

“My husband and I go once or twice a week. The food is outstanding and the nicest servers and cooks. A+ in every way.”

“What a shocker this place is! A group of friends decided to stay local for a weekend dinner. Someone suggested Vinny’s, and I thought this was just a pizza ship with the basic take home Italian dinners. Wrong. The seating area is like a pizza place, but what they serve is comparable to any of the best Italian restaurants I’ve ever been to. Our table had short ribs, rigatoni and broccoli rabe, calamari, chicken, and salads. Every one of the dishes was prepared and presented wonderfully. The staff was super busy that night, but took their time answering any questions we had regarding the menu offerings. It’s a BYOB so budget friendly as well. The food is 5 stars. We had 6 people in our party, and table was kinda tight. Highly recommend this restaurant.”

“Linguini with White Clam Sauce was the best I have ever had. Top notch service too. On my top 5 list of favorite restaurants.”

“Nothing beats their plain pie. Hands down our go to spot. Even my pickiest eater can throw down their plain slices. The seafood pasta is so good and they give you a large portion perfect for leftovers. Whether you’re picking up or dining in, their service is friendly and fast.”

“Great pizza! The flavor was there, the sauce was there and the food was still steaming when I got home 20 minutes later. And their pizza deal from Sun-Thurs is a STEAL! reminds me of NY pizza all the way. The Roma panini is an awesome sandwich to pair with a slice. It’s enough to split with someone. Employees were nice and polite too. Will be back for sure.”

WOW! Just WOW!
Went with friends on word of mouth recommendation and boy O boy, what a treat.
Giovanna, Vinny’s Mom was our waitress, what a sweetheart. I ordered the eggplant rollatini was superb, tender eggplant and delicious ricotta with gravy, tasted just like my family’s recipe. Such a large portion and I couldn’t wait to eat the leftovers the next day. The perfect ending to the meal were the stuffed zeppole filled with cannoli cream paired with a cappuccino.”

Please DO NOT use this form for ordering